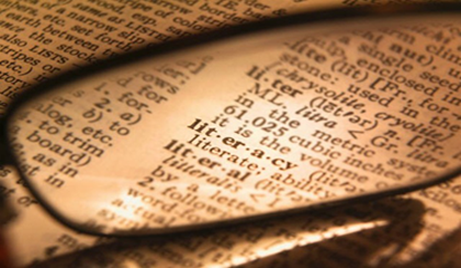 Since I was young, I have enjoyed reading and writing. What I didn’t realize until recently is that throughout my childhood, I was on the path to become literate. To me, literacy has changed a great deal since I was young. For example, my family did not have a computer in the house until I was in 7th or 8th grade. I often wrote with pen/pencil and paper, in the confines of my room. It was a private thing for me – I had many journals in which I would write about what happened that day at school or at home. It was more of a release versus a mode of communication (like it is for me today). I remember when my small town finally had internet access (dial-up, but still exciting… ugh, it pains me to say that I was excited about a dial-up internet connection when today I won’t settle for anything less than a super-fast connection) – I would walk just under a quarter of a mile to my aunt’s house and use her internet. I would also go over to use her word processor on her computer – I would create a newsletter, pretend I ran a newspaper and report the local news or anything that was of interest to me. In fact, I remember calling it “Up-to-Date News.” Moving forward through school, I found a special connection with my English classes because we were prompted to write about what we studied. Same for history – those two classes required papers and essays. It continued to be a passion through the rest of my teen years, and now that I’m almost out of my twenties, it’s how I want to make a living. Funny, these recollections… means so much more now that I understand my literacy path.

So, what is literacy? It has always been, to me, the ability to read and write coherently, to communicate effectively, and has been a part of the educational process. I think of my literacy history and then think about it from a global perspective: there are still places around the world that do not have internet connections or even computers… whereas today, in America, it seems the average family has multiple computers, a fast internet connection, and many books, magazines, or newspapers to read every day. And if your home doesn’t have some of these things, there’s a local library you can visit to feed your literate soul.

Thinking about how I became literate… my parents were adamant about encouraging me to read and write. Perhaps their parents were the same way with then, and so on, and so on throughout the family tree. I can look at this from many informational perspectives – historical, sociological, case studies, pictures/graphics, and even family artifacts. History tells me people learn to read and write because they were taught… and those before them were taught, and those before them were taught. It’s evolution to me. We, as humans, learned to communicate through signs, symbols, grunting, etc, since the beginning of our race. We use the past to improve present literacy, looking back and seeing how our ancestors performed basic literate tasks. We have adapted in some ways, and evolved from there. This takes me straight into the assumptions we discussed in class. Learning about literacy involves the changes we want to make and how we want to act on it. I have tried to remove myself and act as a spectator in recent years to how my literacy has evolved. Case in point – I have loved to write with a pencil and paper, and that started as doodling with crayons. Now, I can’t go anywhere without my computer because I use my word processor as my form of writing. I do still enjoy how a pen feels in my hand and how it touches the paper – nothing will, to me, ever replace that feeling. I can just type faster than I can physically write, so I tend to favor the computer over the pencil/paper type of writing.

Another point… we were discussing in my other class about revising as we go while typing a paper. I am absolutely horrible at removing the internal editor. I find myself constantly editing as I go when typing… but when I write freehand with pen and paper, I don’t edit as I go as much. Going back a little further and thinking about my speech classes during my early years as an undergraduate, I found myself writing freehand my ideas for my speech, then going and typing them up. That’s when the editing would come into play – while I was rehearsing the speech, I would notice myself changing what I wrote down freehand because I could better organize it on the computer. Or, I would consider how I speak compared to how I write (informal versus formal), and then change the direction of my speech to either formalize or take it down a peg so others could relate to the topic.

My literacy is still changing and evolving. I can personally attest to the statement we made in class – “being literate helps create membership” – I find myself drawn to those who read and write every day, and create conversation based on what we write about. This is one reason I love being back in school – I’m surrounded by individuals who love to read and write as much as I do, and we tend to look at the reasons from historical, sociological, philosophical, and political perspectives. Intellectually speaking, literacy has completely changed me as a person – I have to ask myself: “where would I be without literacy?” I may never answer this, and to be honest, I don’t want to. I’m glad I was brought up in a literate household and was pointed in that direction.

We were given some questions to answer following  one of our class discussions – they are listed below.