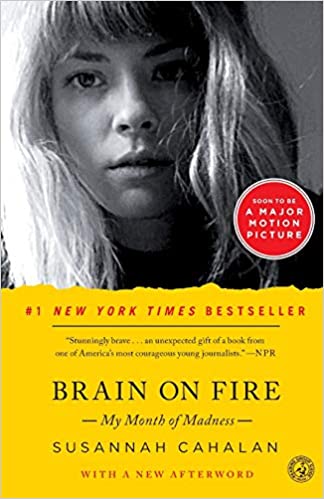 Brain on Fire: My Month of Madness

About a month ago, a dear friend of mine asked if I’d be interested in writing a quick review of a book I recently read. I jumped at the chance because when I first read Brain on Fire: My Month of Madness by Susannah Cahalan, I couldn’t put it down. Her story not only was so interesting, it was scary to think that someone could go through what she experienced.

Without further ado – my review as featured on Traditional Femme:

A Review of Brain on Fire: My Month of Madness by Susannah Cahalan 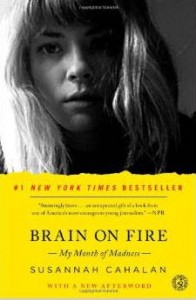 On a rainy summer Saturday afternoon, I was cruising the shelves at our local bookstore and stumbled upon Susannah Cahalan’s memoir, Brain on Fire: My Month of Madness. I admit I was drawn to it by the haunting image of the author and the book’s title on the front cover, but once I read the summary on the back, I was sold. I took it home and I couldn’t put it down.

Cahalan is a young, twenty-something woman with a bright career ahead of her as a journalist with one of New York’s most famous publications. She has a wonderful boyfriend, with whom she recently entered a serious relationship. She’s healthy and ready to take on the world. Life is great. Not much later, she wakes up in a hospital unsure why she is strapped down with wires hooked to her body that are traced back to monitors and machines.

While the precise point of when her illness began is hard to pin down, she realized in the time leading up to her diagnosis some of her symptoms: migraines, light/color sensitivity, difficulty controlling emotion, seizures, numbness in her left hand, hallucinations, and intense paranoia.

With her paranoia, it started with a bug bite that prompted her to fumigate her apartment to rid it of the bed bugs she thought she saw. She suddenly had the urge to read through her boyfriend’s emails – something she never would normally do. She started to feel like she was slipping into a deep darkness. END_OF_DOCUMENT_TOKEN_TO_BE_REPLACED